In 2017, I sort of neglected recommending that many books that weren’t epic fantasy, so let’s change that in 2018, by recommending a sci-fi book in January!

I have no way to communicate with Earth.

I’m in a Habitat designed to last 31 days.

If the Oxygenator breaks down, I’ll suffocate. If the Water Reclaimer breaks down, I’ll die of thirst. If the Hab breaches, I’ll just kind of explode. If none of those things happen, I’ll eventually run out of food and starve to death.

-Quote from The Martian’s Goodreads page. 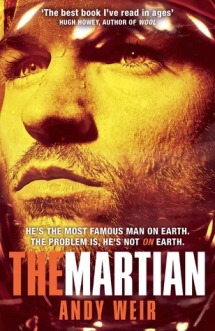 I’ll be honest, that quote sums up The Martian, by Andy Weir, pretty well. The book is about Mark, an astronaut who gets stranded on Mars, after a space mission goes horribly wrong. Now, he is left with the impossible task of trying to let people on Earth know he is alive, whilst trying to survive on Mars.  Not an easy task.

For the most part, you spend the book with only Mark, which sounds like it could be dull but in fact its quite the opposite. It seems that dark humour and really bad jokes are part of Mark’s coping mechanism for holding on to his sanity; depending on what type of humour you like, you’ll either be chuckling or rolling your eyes as you read The Martian.

The thing that really sold the book to me was the lengths that Andy Weir went in making the story believable. He avoided going all out sci-fi and giving Mark incredible technology to help him survive the red planet. Instead Mark has to survive using whatever debris was left from the space mission and duct tape. I will never underappreciate duct tape again.

I thoroughly enjoyed The Martian. It is a sci-fi book, grounded in reality with modern day technology. Its main character is incredibly likeable and you can’t help but want to succeed. I recommend this book to any sci-fi fan or anyone who loves the concept of space exploration. The Martian is also a great book for anyone who wants to start reading sci-fi and wants to start off with something that is a little more relatable with modern day technology.

I would love to hear your thoughts on The Martian, let me know in the comments!

The book cover came from goodreads.com.