In this post, I’ll be recommending one of the best video game sequels I have ever played. 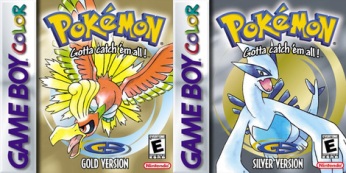 A bold statement, I know, but nonetheless true. Pokemon Blue and Yellow were the first games I had ever owned on my Game Boy Color and I had played both through to the end. So upon hearing that they were getting a sequel, or a new generation, little eight year old Thero got excited. And when she finally got Pokemon Silver, she was not disappointed.

The premise is very similar to the original games, you are a young Pokemon trainer who sets out on a journey to become the best. Along the way, you will battle other trainers, including gym leaders, acquire a rival, complete a pokedex and prevent Team Rocket’s return. This time, your adventure takes place in a new region of the Pokemon world, Johto, had a further 100 Pokemon for you to catch, bringing the total number of Pokemon to 251. Gold and Silver will be keeping you busy.

Now, you are probably thinking that this sounds much like the original three games, so why didn’t I suggest you play those? Because Gold and Silver improve on almost all of the gameplay from the other games. Two new Pokemon types were introduced, dark and steel; some Pokemon were also given two types and more Pokemon moves (attacks) were introduced. A day/ night cycle was added, so now some Pokemon could only be caught at a particular time of day. There were different ways to evolve your Pokemon: being traded while holding an item, if that Pokemon reached a certain level of happiness and by using the sun stone.

Some of the changes were rather small but then meant the gameplay was further expanded. Like the introduction of Pokemon having genders leading to being able to breed Pokemon. New types of pokeball added further strategy to catching Pokemon. Some additions just helped to evolve the series, like adding an experience bar for your Pokemon or giving the backpack different compartments. As player, it felt that every decision was made to improve the series and it certainly succeeded.

Overall, I think its best for people interested in the Pokemon series to start with Pokemon Gold and Silver. If you are thinking you can’t play these games because you don’t have a Game Boy Color, don’t worry the remasters, Pokemon Heartgold and Soulsilver are just as good as the originals. These two games show that video sequels can surpass the originals, by adding new content and improve on the original gameplay, which is why I’m recommending them.

Oh, and if you do play the game and complete it, stick around for after the credits.

Pokemon Gold & Silver  is avvailable for Game Boy Color. Pokemon Heartgold and Soulsilver is available for the Nintendo DS.

Images of the game cases came from Pokemon Database.