This year, Fairy Tail has had some serious competition…

Last year, Fairy Tail was easily my stand out favourite anime. It had the right mix of action, drama and humour. Set in a fantasy world and following the adventures of a group wizards, it felt like this anime was made with me in mind. One thing that last year’s anime challenge highlighted was that I needed to watch more anime. Out of this, two other anime series have grabbed my attention. 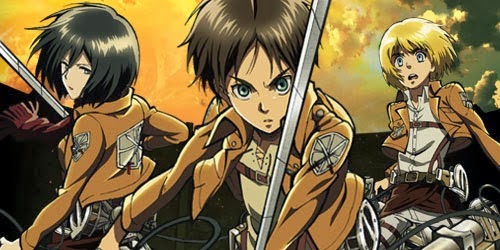 The first series was Attack on Titan and it couldn’t be any more different to Fairy Tail. Whereas Fairy Tail balanced tragedy with humour, Attack on Titanalmost revelled in the pain. The premise: humanity has almost be wiped out by beings called Titans and only the small military stands in the way of humanity’s extinction, appealed to me as I have always enjoyed those ‘against the odds’ stories. That being said, while I love Attack on Titan, its a little too angsty to push Fairy Tail off the top spot.

The second contender was Sword Art Online, an anime series that appeals to my gamer side. The initial story was all about a group of MMO players getting stuck in the game and it turning into a real life or death situation, because if you died in the game, you died in real life. While I like the world, the characters and plot, the one downside is the pacing. The pacing in Sword Art Online is all over the place. At one point it is incredibly slow and then at the end it just rushes to the finish line, without really explaining what is going on. Admittedly, the pacing does get better in Sword Art Online II but that doesn’t stop it being an issue in the first two story arcs.

So, after all that, what is my favourite anime so far? It’s still Fairy Tail. That doesn’t mean I don’t love Attack on Titan and Sword Art Online, its just I love Fairy Tail just that little bit more. But who knows, perhaps there is another anime just waiting to take Fairy Tail’s place in my heart…

What is your favourite anime? Please share it in the comments, as I love adding to my anime watch list!

Tomorrow’s post is all about favourite male characters, so I hope to see you tomorrow!