This week, I want to talk about book that I found I couldn’t put down. So if you’re looking to reading a sci-fi novel set in a dystopian future, then settle down and read on! 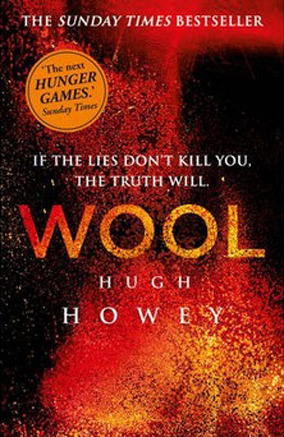 dystopian/post-
apocalyptic novels out there at the moment. Wool by Hugh Howey is set in the future where the surviving humans live in silo like structures underground. Think Fallout but these people can’t go outside, if they do they die. Join Jules, a newly appointed sheriff, who tries to uncover the truth about the silo and what happened to the people of the past but there are people who will stop at nothing to keep the past buried.

One of the unique elements of Wool, is the setting. Rather than being set in a bombed out city or a shanty town, we taken underground in a silo like structure, which is falling apart but still functioning. Very early on, we get to explore the main parts of the structure and Howey does an excellent job at creating a believable society that has spent many years living underground.

Originally, the story was written as a series of novellas before being collected into a series of books, which is apparent as many of the chapters finish on a cliffhanger. This makes the book more suspenseful and encourages you to read more in one sitting. I will admit that the next two books in the series, Shift and Dust, don’t quite hit the same air of mystery and suspense that Wool does, but I would still recommend reading them, so you can get the full story and answers to the many questions the books generate.

So, Wool was my recommendation for this month. Let me know what your thoughts are on Wool or any other dystopian/post-apocalyptic novels you’ve read!